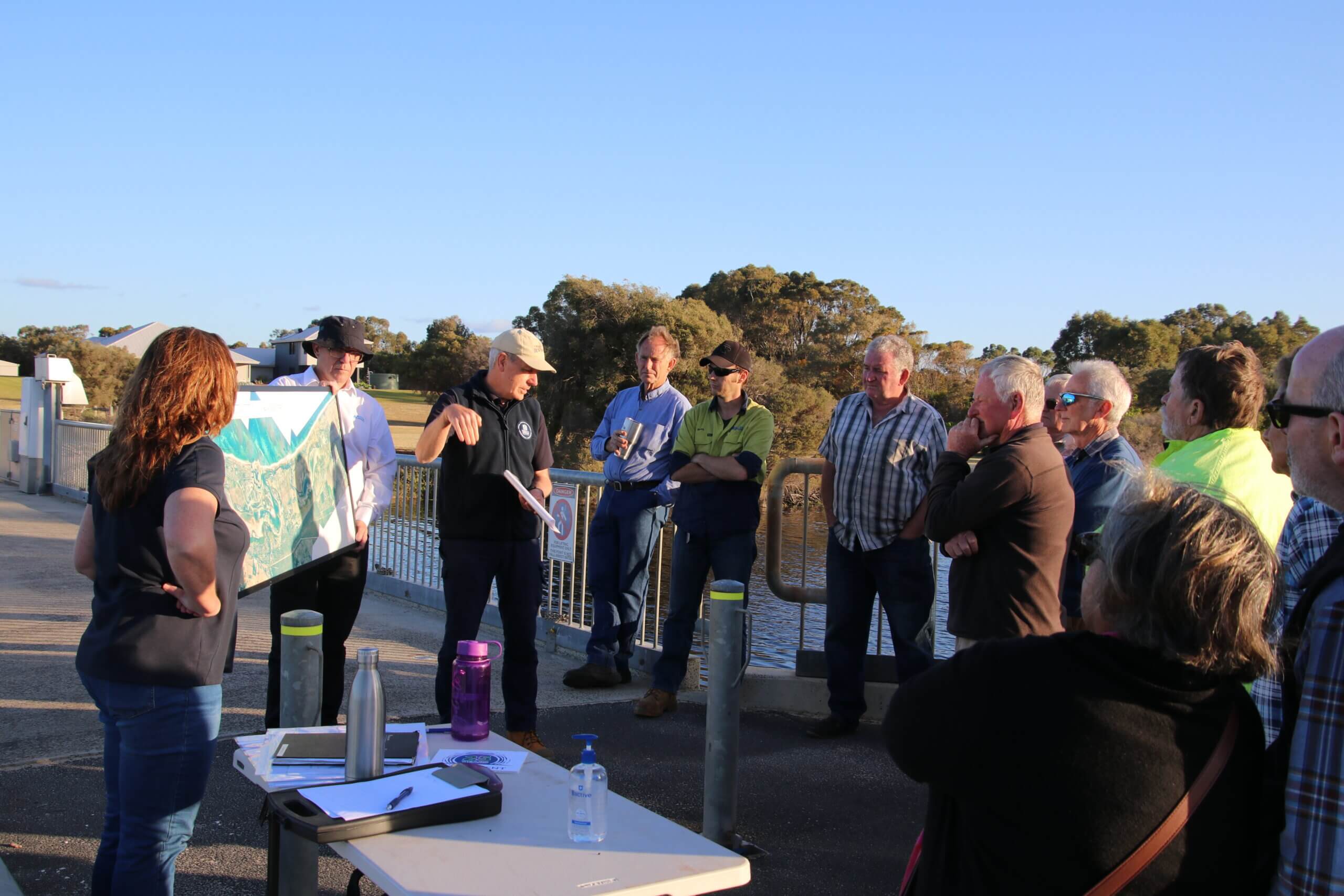 ­­­­­The surge barriers were originally installed at the exit channels on both the Vasse and Wonnerup estuaries in 1908 to protect low-lying areas in the City of Busselton from flooding with seawater during storm surges.  The barriers were upgraded in 2004 to the current structure that includes gates within the barrier to allow fish movement and seawater inflows.   Dave Mayger from the Water Corporation explained how the gates operated over winter months to release water flows from the catchment and over summer months to improve water quatliy and reduce the risk of fish kills.

Dr Kath Lynch from the Department of Water and Environmental Regulation discussed some of the the complexities of managing the wetlands.    Residents who came along were interested to know how the water levels are managed to reduce flood risk in winter and water quality over summer months.  Kath outlined the seawater inflow trials that had been undertaken since 2015.

“Allowing seawater into the Vasse estuary over summer has improved water quality and reduced the risk of fish kills but unfortunately it has also led to lower numbers of water birds due to higher water levels and salinity” said Kath.

“We are constantly reviewing our management and monitoring data to try and get the best outcome for the different aspects of the wetlands”.

Kim Williams from the Department of Biodiversity Conservation and Attractions shared  the importance of the Vasse Wonnerup wetlands for migratory birds and breeding of black swans.

“Some of the migratory birds that visit the wetlands have flown over 5000 km from the northern  hemisphere and need to replace 30-40% of their body weight lost in flight” said Kim.

Chair of the Wonnerup Residents Association, Peter Jodrell, attended the event to increase his knowledge of how the wetlands are managed.

“This has been really informative in understanding how the whole system works” said Peter.

“You can’t look at each part in isolation.  All of the neighbouring residents are keen to understand how everything works and how the various management groups work together.”

Warren Hope of West Busselton is a keen ocean kayaker and came along to better understand the interconnectivity between the estuary and the ocean.

“It is great to get all the information from the various departments. Between the community meeting at the Yacht Club a few weeks ago and this meeting, we appreciate being informed.” Said Warren.

This project is delivered by GeoCatch, as part of Healthy Estuaries WA and Revitalising Geographe Waterways. These State Government initiatives aim to support the long-term health of our south-west estuaries.