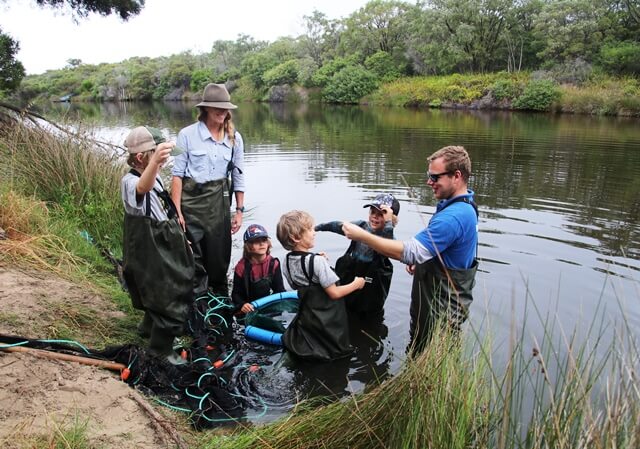 Over twenty species of fish, including popular recreational species Black Bream, Blue Swimmer Crabs and Tarwhine, and a wide range of aquatic invertebrates were found in recent surveys of the Toby Inlet.

The surveys were carried out by scientists from the Centre for Sustainable Aquatic Ecosystems at Murdoch University as an initiative of the City of Busselton.  Surveys were conducted in the Inlet in November 2017, when the sandbar was closed and again in February 2018 after the bar had been opened.

Lead scientist Dr James Tweedley said “Opening the bar increased salinity and provided access for marine species of fish to enter Toby Inlet. This allowed species such as Tailor, Yellowfin Whiting, Tarwhine and Herring (Tommyruff) to enter the estuary, increasing diversity”.  “Despite being a small estuary, we caught many of the fish species found in other larger estuaries” said James.

“We also caught a wide range of aquatic invertebrates, including polychaete worms, molluscs and crustaceans, such as amphipods, and the larvae of various insects. Some of these species are intolerant of pollution and low oxygen levels, so the fact that they were present is a good sign for the health of the Inlet” said James.

The local community also helped out with the surveys in November with 58 students and 4 teachers from Dunsborough Primary school and 40 members of the community lending a hand.  “It was great to see the community and kids getting involved and excited about what lives in the Inlet” said Sonia Lamond from GeoCatch.  “James is like a Wikipedia of biological information on fish and invertebrates. Adults and kids were really engaged by what they were discovering through the sampling process and through James’s fascinating interpretation”.

The fish and aquatic invertebrate surveys will help the City of Busselton in the development of a management plan for the Toby Inlet.  “Understanding what lives in the Inlet will help us better manage water movement and habitat and set a baseline for the future” said Robyn Paice Senior Environment Officer from the City of Busselton.  “The surveys showed that the Toby Inlet still retains important ecological values that we need to ensure are protected”.

The Toby Inlet surveys were initiated by the City of Busselton in partnership with Murdoch University, the South West Catchment Council and GeoCatch with funding from Coastwest.