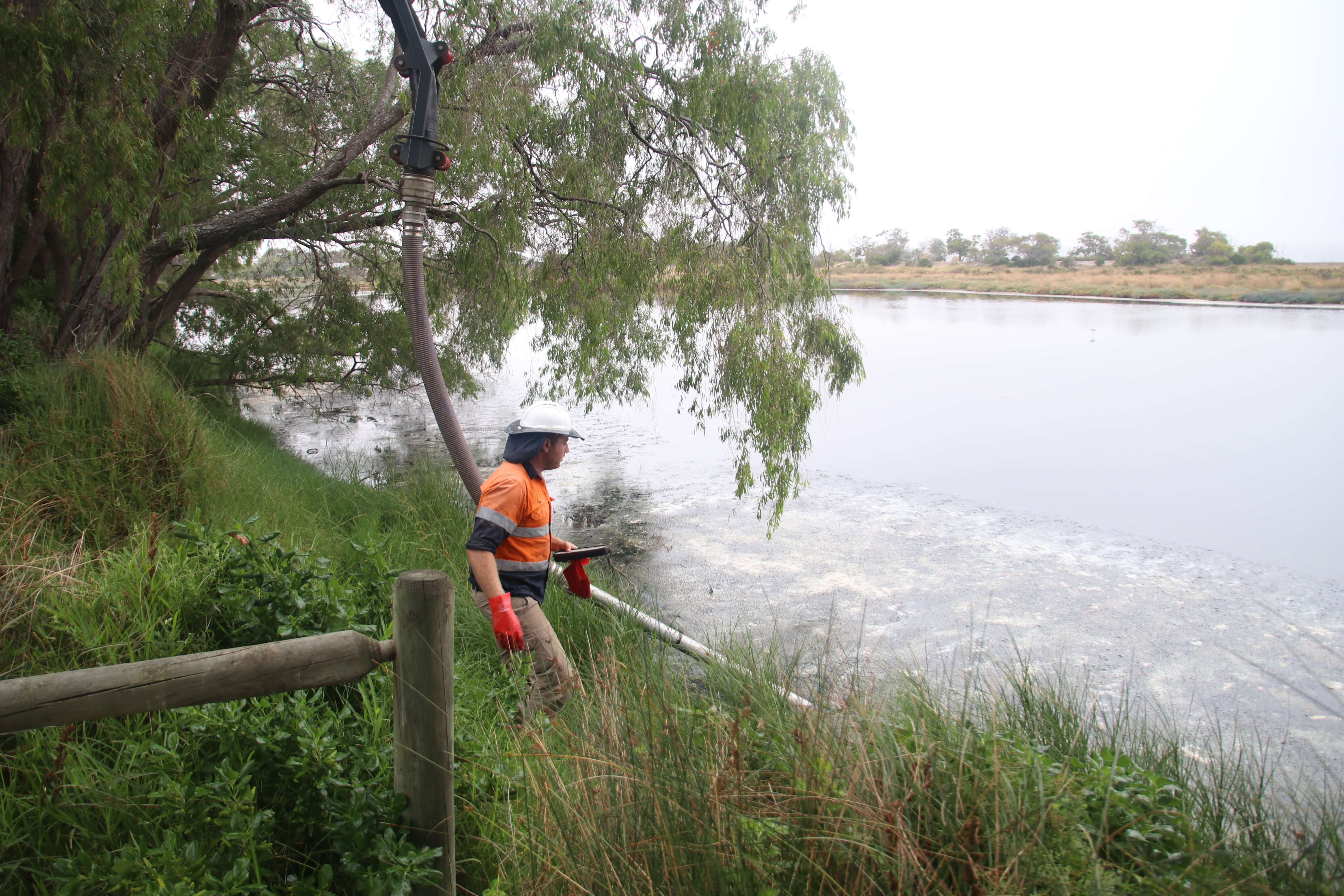 A trial to physically remove a rotting algal mat along the shoreline of the Vasse Estuary was carried out last week to see if the algae could be removed successfully to alleviate foul smells and provide relief to Wonnerup residents.

Sandgroper Contractors used a liquid waste truck with a boom hose to remove the algal mats that had accumulated alongside James Richardson Park at Wonnerup.  The technique had been used successfully in the past at removing algal scum at the Vasse surge barriers.

The Department of Water and Environmental Regulation (DWER) Environmental Officer, Dr Jo Browne was on-site and said removal of the algal mat was a trial and error process for the contractor who used a few different techniques before they were able to successfully suck up the scum.

“Eventually the contractor used water to hose the rotting algal mat to break it up and dilute it so that it could then be sucked off the surface of the mud” said Jo.

The process took around seven hours to complete, with most of the algal mat removed where it had built up along the Estuary View Drive shoreline. Following the removal of the algal matt, contractors transported the material for disposal at Water Corporation’s wastewater treatment plant.

The algae was identified by the DWERs Phytoplankton Ecology Unit as a cyanobaterium, Oscillatoria spp that forms benthic mat ecosystems.

“Benthic species are much more resilient to salinity changes than aquatic species as the benthic species create their own environment with mucus.  It is this mucus that ultimately causes them to float up and bring the sulfide to the surface causing the foul smells” said Jo.

Over the last four years the DWER have been trialling different management of the Vasse surge barrier over summer months to improve water quality in the estuary and reduce the risk of fish kills.

Over the last two years seawater has been allowed into the estuary earlier in the summer and maintained at higher water levels than historically.

“Unfortunately the algal species that formed the mats are happy in saline conditions that occur in early autumn so altering management of seawater inflows would not have made a difference” said Jo.  “Physical removal was really the only option so we were really pleased that the trial was a success”.

The DWER will continue to monitor the water quality in the Vasse estuary channel and the algal build-up to determine how effective the removal has been in the longer term.

Local residents have also been asked to fill out a survey to see if there has been an improvement in odour after the removal.  Based on the feedback a cost benefit analysis will be undertaken to determine if this activity should be ongoing.

The trial was part of Revitalising Geographe Waterways which is a state government initiative aiming to improve water quality, waterway health and management of Geographe waterways.