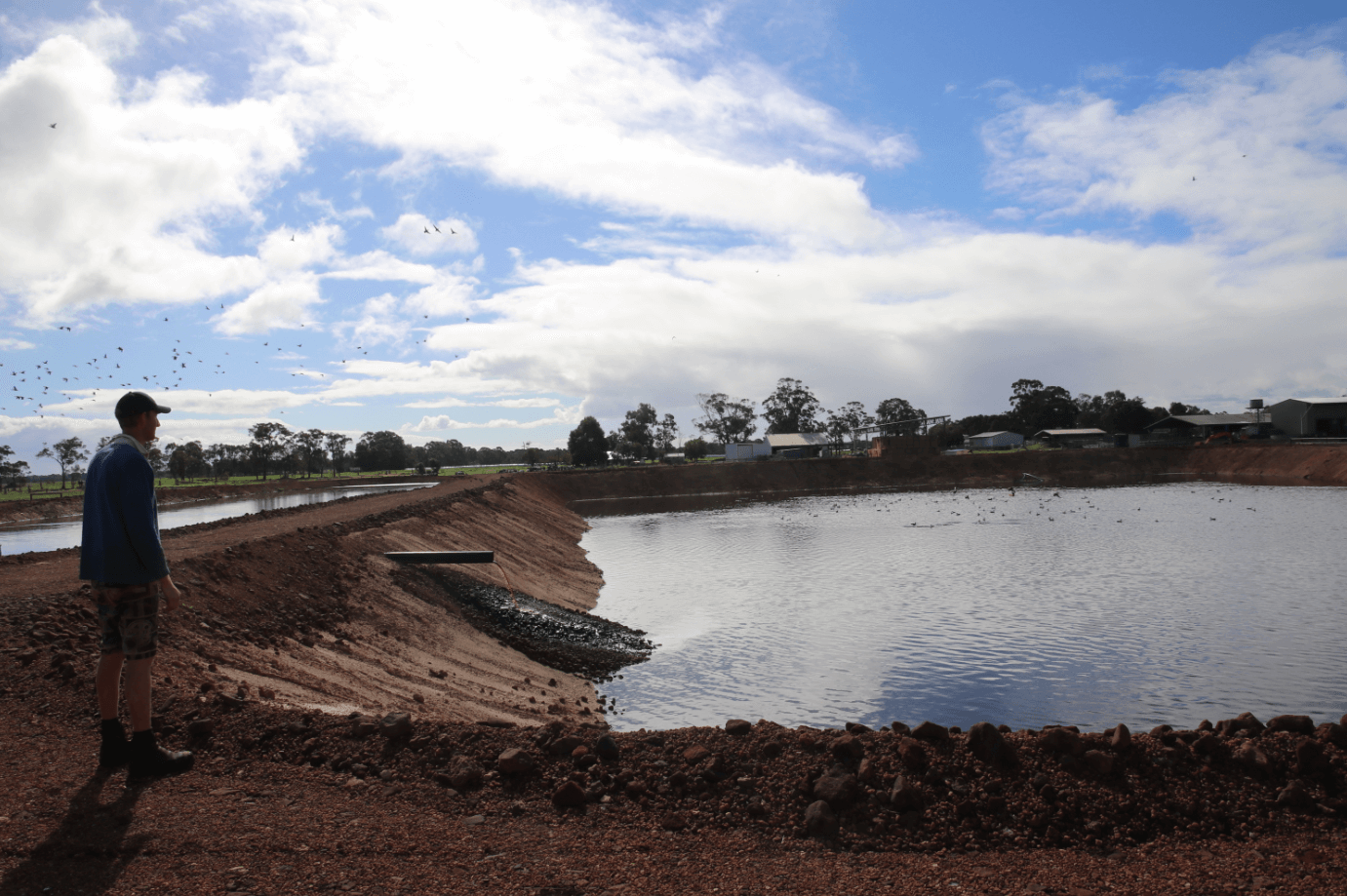 Geographe dairy farmers are continuing to show their commitment to reducing nutrients leaving their farms, with five dairy effluent system upgrades being completed this autumn.

Effluent from dairy sheds contribute 11% of phosphorus and 7% of nitrogen (on average) to the Vasse Wonnerup wetlands each year, so improving dairy effluent systems has been a priority under the Revitalising Geographe Waterways program.

Ten Geographe dairy farmers are on board to improve their effluent systems under the program which offers financial incentives through GeoCatch and Western Dairy to develop an effluent management plan and implement upgrades to current systems.

The Haddon family have recently finished their dairy effluent upgrade.  With a herd size of 1300 cows, the Haddon’s run the biggest dairy farm in the catchment.  As part of the upgrade the Haddon’s installed a 34 megalitre dam (equivalent to 14 Olympic swimming pools) to store the liquid component of their effluent, which will be used to irrigate 95 ha of the farm, returning valuable nutrients back to pastures.

“Finally, after three months solid work, we got the end result,” said Garry Haddon as he inspected the completed pond.

Elgin dairy farmer Darren Merritt is also well on the way to finishing his effluent upgrade.  As part of his upgrade Darren has purchased an effluent tanker that enables him to reuse effluent across his farm.

“This is something we have invested a lot time and effort into, in some very challenging years for dairy farmers” said Darren.

Both the Haddon and Merritt upgrades are reusing effluent on farm, reducing the risk of nutrients entering Geographe waterways and reducing the cost of fertiliser bills.

GeoCatch Project Coordinator Bree Brown says the effluent upgrades have additional benefits for the farmers beyond the re-use of nutrients.

“As upgrades are completed, farmers who supply milk to Harvey Fresh are eligible to access milk price incentives.”

“This is a good initiative by a milk processor and offers extra incentive for our farmers to tackle this often tricky job, while helping our local wetlands and waterways” said Bree.

All 10 upgrades will be completed by the end of the year reducing an estimated 3% of phosphorous and 2% of the nitrogen load entering Geographe waterways.

The upgrades have been coordinated by GeoCatch as part of the state government-funded Revitalising Geographe Waterways program. Farmers interested in managing nutrients on their property can contact GeoCatch.